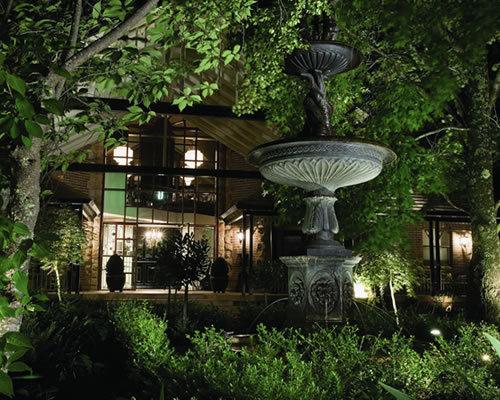 Echoes Boutique Hotel & Restaurant was designed by architect Peter Doreen and built in 1990 as a retreat for the famous Australian novelist, playwright and author Thomas Keneally AO, best known for his Booker Prize winning novel of 1982, Schindler’s Ark.

The current building replaced a historic homestead that was commissioned by Florence Young in the late 1920’s.  Florence Young was a missionary who travelled extensively to the Far East and Papua New Guinea to preach Christianity and undertake missionary works. From the late 1940’s until the mid-1980’s the old homestead was a retreat for the Australian Christian Nurse movement.

By the mid-1980’s the house was in a poor state of repair and became a fire hazard resulting in the house being demolished in the late 1980’s. The site was later auctioned and the concept for Echoes guesthouse was born. The end result from this concept was a 3 storey contemporary guest house that combines a sleek modern design with a touch of federation all whilst showcasing the panoramic views of the Blue Mountains.

Built on the edge of the escarpment overlooking the Jamison Valley, Echoes was one of the first luxury guesthouses in the mountain to offer award-winning cuisine. Gourmet dining with fresh ingredients has always been the focal point for the Blue Mountains and Echoes established its dining origins with the famous French chef Claude Corne, renowned for his Sydney restaurant “Claudes of Woollahra”, who cemented Echoes as a fine dining venue in the early to mid 1990’s.

Over the years, Echoes has evolved from a luxury B&B to what is now a thriving boutique hotel with a busy award winning restaurant, bar & lounge.

Renovated in 2006, Echoes is now a luxurious and stylish 4 ½ star boutique hotel with a much sought after location in the Blue Mountains.